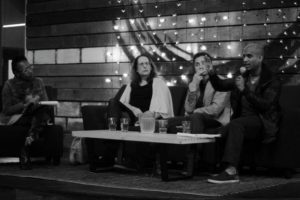 As the Chronicle of Social Change recently wrote, “It is not ordinary to see people lined up around the block to hear a panel discussion on juvenile justice.” But that’s exactly what happened on January 14, when nearly 200 people gathered in downtown Oakland for a conversation around the book, “Burning Down the House: The End of Juvenile Prison.”

Read more about the panel discussion here. See photos from the event here.