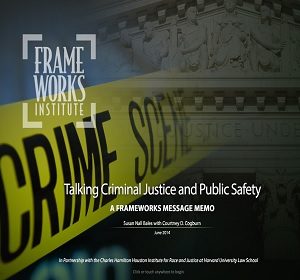 Criminal justice reform advocates are cautiously optimistic that their day in court may have arrived at long last.  While many other progressive issues appear to be at a standstill (witness immigration reform, climate change, etc.), criminal justice issues appear to have the wind at their back.  From the Department of Justice to the National Academy of Sciences and the U.S. Congress, leaders are re-examining how the U.S. got stuck in one gear–the prison gear–and the ramifications for moving our society forward.

Yet, history suggests this optimism be tempered with lessons from past social movements. Taking advantage of the moment of opportunity requires reformers not only to seize the day with policies and programs, but also to put forward a new narrative about the criminal justice system – how it works, to what end and what can be done to improve it. That new narrative cannot be invented out of whole cloth; it requires a systematic understanding of the stories we have been telling ourselves about public safety over time–in media, in public and private discourse, at kitchen tables and water coolers.  In short, reframing the narrative is crucial to the sustainability of the reform momentum, but it is not easily constructed.  To replace the status quo, a reliable reframing strategy must reshape and redirect public thinking toward meaningful policies.

This is the task that the FrameWorks Institute set out to address in partnership with the Charles Hamilton Houston Institute for Race & Justice at the Harvard University Law School.  With funding from the Ford Foundation, the partners undertook a comprehensive multi-method research program designed to document how experts and ordinary people differ in their understandings of criminal justice and how group and media discourses further affect public understanding. Drawing on experimental methods from across the cognitive and social sciences, FrameWorks researchers developed and tested new reframing tools–metaphors, values, fact patterns–to document their ability to overcome the conceptual ruts where thinking routinely breaks down.  Finally, they identified the contours of a powerful new narrative and compared this to the story that influential reform groups have been telling.  Six research reports and a summary video are available on the project’s webpage.

The Rosenberg Foundation provided a grant to synthesize this information into a comprehensive MessageMemo and to allow the partners to design, conduct and evaluate a full-day workshop for California criminal justice advocates. Would those groups that had been working on these issues for so long, with well developed messaging strategies, find this work helpful, be able to envision its incorporation into their future strategies, and engage with this evidence-based approach to reframing?  And how can those who have long documented the system’s disparate effects on communities of color engage Americans who consistently refuse to see race as a cause or effect of American policymaking?

In May 2014, 29 representatives from 25 different organizations gathered at UCLA’s Luskin School of Public Affairs for a daylong, interactive workshop to consider the findings from the FrameWorks research.  Policy directors, communications staff and strategists from the ACLU of San Diego and Northern California, PolicyLink, PICO, Communities in Schools, Californians for Safety and Justice, the Los Angeles Regional Re-entry Partnership and the National Coalition to Abolish the Death Penalty, among others, grappled with these findings:

FrameWorks also shared with the group a set of powerful new reframing elements that, together, constitute a new narrative about the system:

In addition to these findings, analysis conducted by the Houston Institute and FrameWorks revealed many current communications practices that are not as effective as advocates surmised.  Appeals to efficiency and cost-effectiveness, for example, did little to advance support for their policies.  Appeals to the value of fairness were not productive.  Calling attention to the broken nature of the system simply made people more fatalistic and less engaged. At the workshop, Houston Institute leaders showed how they re-examined their own messaging in light of the findings and shared the challenges of rewriting op/eds and letters to the editor with participants.  This proved one of the best-received learning moments in the workshop. Participants clearly demonstrated their enthusiasm for rethinking their communications strategies in light of new evidence.

The evidence is clear: The stories we tell are likely to be encoded in public opinion and policy.  It’s time to get the story right and to build a solid base of understanding that propels policymakers to embrace meaningful criminal justice reforms.